Among the largest pipe organs in Ventura County, Ascension’s Reuter/Salmen pipe organ is 49 ranks (sets) of pipes, on three manuals (keyboards) and pedals, with two enclosed chambers. Originally installed in 1989 by Reuter of Lawrence, Kansas with 31 ranks, it reverberates in the acoustic “bloom” of the Ascension Lutheran sanctuary designed by architect Neal Scribner and built by Larry Carignan. Now, with the discriminating artistry of independent organ builder David Salmen of South Dakota, many sets of flutes, principal stops, and reeds have been added which fill out and enrich the total sound. This outstanding instrument now has eight sets of reed pipes including the Festival Trumpet, with an aural filigree of little Zimbelstern bells and chimes. The console has been modernized, making the total range of pipe organ repertoire much more accessible. It is now ready to welcome and accommodate musical groups from our whole Ventura County region to enrich the total cultural scene.

Listening to the brilliant music pouring forth from Ascension’s 49-rank Reuter/Salmen on Sunday mornings, you already know that our organist, Margaret Ricci, is a gifted woman. Perhaps you didn’t know her gifts are not confined to music. This Conejo Valley mother of two is also Executive Director, Attribute Sciences at Amgen, Inc., where she has worked for 19 years. She earned her undergraduate degree in Chemical Engineering at Princeton, did her graduate work at the Massachusetts Institute of Technology, culminating in her doctorate in Biochemical Engineering. In February, she published her 35th scientific paper, a work titled “In-use physicochemical and microbiological stability of biological parenteral products” in the American Journal of Health-System Pharmacy.

Yet she tells us she isn’t anywhere near as good an organist as her brother, the molecular biologist. “He puts me to shame.” Ahem. Hard to imagine.

Margaret has been playing organ “since my legs were long enough to reach the pedals,” she recalls. She started playing organ in church at age 13. Her venues have ranged from Episcopal to Baptist to, well, Lutheran.

Are science and music family traditions? “My parents don’t read a note of music. My brother wanted to take piano lessons. He bugged them and bugged them. They thought it would go away,” she says. “Then my father figured out a solution; he bought a player piano.” That way, she explains, my parents would still be able to listen to the piano after their kids got tired of lessons in, say, about a month. Things obviously did not work out that way.

An East Coast woman “through and through,” Margaret admits she experienced some culture shock when she arrived in casual Southern California to join Amgen: “I was a bit more Type A than most people here.” Possibly there really was something unusual about Margaret. She describes a visit to Sears early on when she went to purchase a fire extinguisher, and store personnel assumed she was an inspector and escorted her to examine their unit encased in the wall.

But she went from feeling she didn’t fit in to the very active and full life she leads here today, with her husband, Michael — who is an engineer and plays guitar — and their 11 and 12-year-old sons, Luke and Quinn. Do they play also? “My older son dabbles in piano, and now he’s playing clarinet in beginning band. My younger son is playing drums,” she says.

Her tenure at Ascension actually comes after Margaret took a break from playing professionally. “I played for King of Glory Lutheran Church and I was also directing the choirs, the children’s choir, contemporary band, planning programs…in addition to my job at Amgen. When my second kid came along and I had two kids under the age of two and a full-time job, I just had to say, ‘I can’t do this anymore.’ I was kind of burnt out.”

She was ready for a comeback when Ascension came along. “I realized, at Ascension I could do the stuff I liked. I could just show up and play,” she says — and leave the organizational responsibilities of being Music Director to Howard Sonstegard. Margaret also realized that playing in our church was giving her a feeling she enjoyed and missed.

She thought, “It would be a shame if I was so tired from doing only the things I had to do that there was nothing left for the things that give me joy.”

She’s enjoying playing at Ascension. And, she says, “I’m happy to be a part of the Ascension community.”

We give thanks for Margaret and her music. 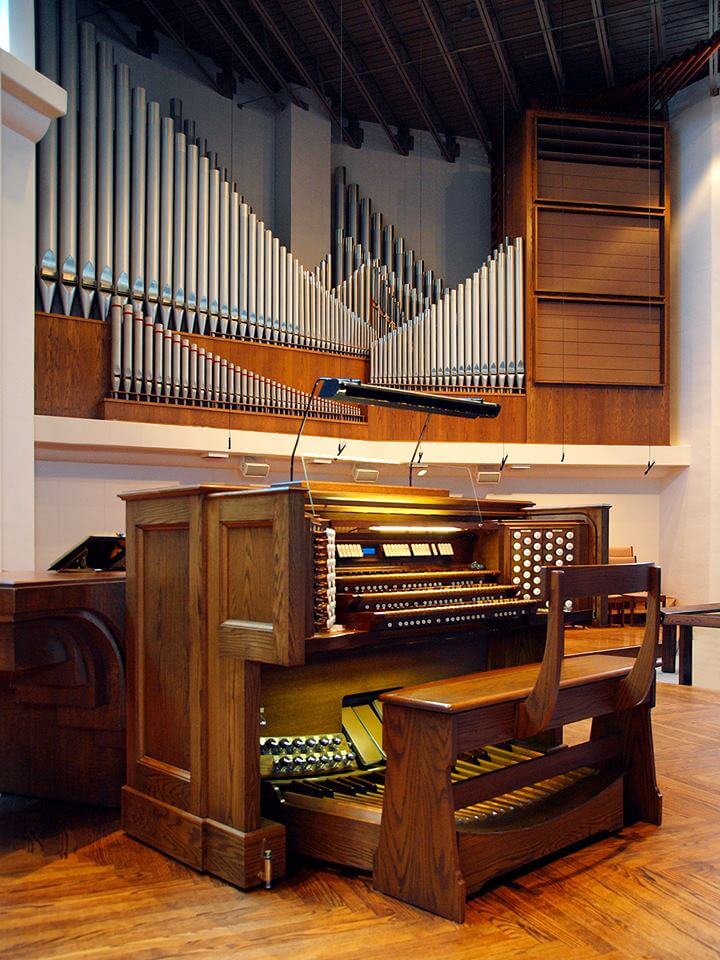 Since the COVID-19 pandemic began, the SAM’s Tram service from Ascension has been pretty quiet. However, now that many of us have vaccines and feel more comfortable being out and about, it’s time to reintroduce the program! SAM’s Tram is Ascension’s Senior Adult Ministries transportation service. We match seniors from our congregation that need rides to local appointments with Ascension volunteers that are willing to drive.

If you’re a senior who needs a ride (or a caregiver for one), please contact me with the ride details. My contact info is at the end of the article. The more lead time you can give me -- at least a week or two is best -- the more likely I can find a driver for you. I’ll let you know either way. The service is free! If you feel compelled to give something, you can give your driver a dollar to go to Ascension’s Caring Ones to help the needy in our area.

We’re always looking for more volunteer drivers to add to our roster. There is NO long-term commitment. I blast out detailed ride requests via e-mail to all of our drivers. You need only say “yes” to a ride that works for your schedule, and your only commitment is for that one ride. Many of us work and can only drive occasionally. That’s OK! The more drivers we have on our roster, the more likely we can fulfill a given request, and the workload gets spread around. This is a simple and effective ministry and we’d love to have you join us! Please call or e-mail me if you’re interested.

“[SAM’s Tram was] a blessing to my mom when she could not drive anymore.  The friendly drivers got her to her weekly hair appointments, and occasional other doctor/dentist appointments.  The social interaction with the drivers gave her a lift and became a bright spot in her declining life quality.  I was pleasantly surprised and pleased when two drivers who were more frequent came to my mom’s celebration of life service.  What a dedicated group of people, making a difference in the lives of our elders!” — Excerpt from a thank you note written by the daughter of one of our riders

Please pray for our SAM’s Tram riders and drivers, and contact me anytime if we can be of service to you, or if you you’d like to join us as a driver.

ps - we've had an uptick in requests and could always use new drivers.